Warning: "continue" targeting switch is equivalent to "break". Did you mean to use "continue 2"? in /homepages/3/d628491147/htdocs/clickandbuilds/ServiciosPblicosascifishortfilm/wp-content/plugins/revslider/includes/output.class.php on line 3468
 Shooting on bluescreen – Servicios Públicos, a sci-fi short film
X

The main goal on this project was to make the most stunning film for as little money and small crew as possible. When we won the grant,  all of the sudden, that possibility was real. The $10.000 that the Government gave us was not a whole lot of money, but was indeed much more than the initial $300 budget we used for our first tests.

Thanks to the grant money, we were able to rent a Cinealta high definition camera and shoot in a pretty cool and spacy soundstage. We were as thrilled as if we had won the lottery… but despite our new possibilities, we always stuck to our initial premise; how to make the best film possible out of a small crew and small budget?

I can’t insist enough on preparation. A good, fluid and productive shooting day is only the result of discipline and planning. It’s not the result of divine intervention or artistic inspiration. You have to be organized and plan each detail ahead. And more so if you are dealing with crowds and special effects like we did. The grant money was a once in a life opportunity and we knew we couldn’t take any chances. We only had budget for one day of filming, so it was indispensable to take additional preparations so that day was enough to grab everything we needed.

When we drooled over the images of George Lucas shooting in that blue, infinite void at Elstree Studios, we never imagined how cool, and at the same time how extremely complicated it is to work without physical boundries to limit your location. One of the first things we decided to do in pre-production was to make a shot-by-shot 3d animatic of the entire film. This was our way of communicating ideas to people outside the main crew that weren’t so deeply involved in the movie and didn’t know how the city and it’s locations would look like. Camilo Gutierrez, our Pre-vis artist, spent two complete months prior to principal photography animating and rendering this animated version of the storyboard.

This rough animated version of the film was the essential blueprint of the entire preproduction phase and the main reference for Principal photography. The closer we stayed to the animatics, the faster we could shoot. When the day finally came and we arrived at the lot, everybody, from the cameraman to the extras had previously seen the animatics and knew exactly what to do. In addition, we had a bunch of computers with Adobe Premiere loaded for real time reference. All this preparation made possible for an inexperienced crew like ours to pull out 60 complicated shots in just one day.

Some of you may be asking, why blue? Well, because we saw in our previous tests that blue handled under and overexposure much better than green. We shot this short film with Sony’s 24p CineAlta HDW-F900/3 and had the tremendous luck of having film veteran DP Rodrigo Lalinde on board. I was excited to work with him because I was hoping he’d bring to the project the visceral and crude quality he had brought to his previous works; Barbet Schroeder’s Our Lady of the Assassins and the Cannes official contender Rodrigo D. 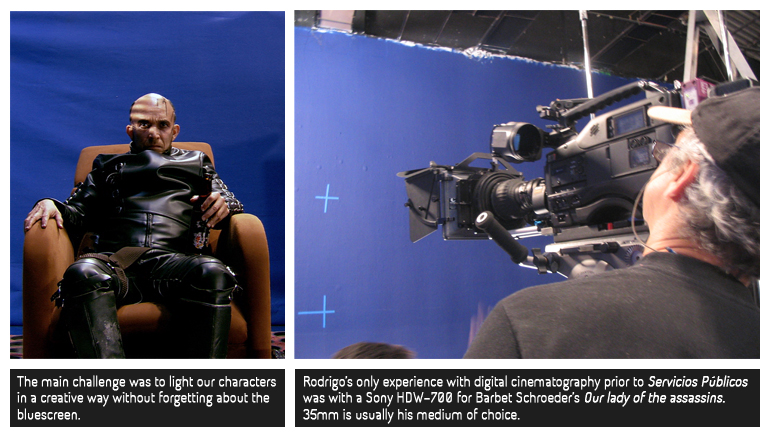 We had strong faith in the camera image quality, but I knew it was going to be a hell of a challenge to attain creative lighting and at the same time capture an even background to pull out clean mattes. Servicios Públicos is meant to be a black and white film, with a very strong expressionist cinematography. We wanted beautiful side and back lighting on our characters, but had to light the color key walls and floor with soft omnipresent light with no shadows. In the tests we made at prepping phase, we found out that a green key was in general terms easier to pull out, but also easier to overexpose. So if our priority was to light our characters with high light keys, blue was harder to mess up. Sum to that the fact that we had to deal with scenes with lots of extras walking around and many of those extras had blonde hair of various lengths.  The slightest overexposure meant giving all the blond extras a nasty digital haircut.  So all in all, we found out that a blue color was all round more manageable.

Another problem to quickly arise was the fact that nobody shoots full bluescreen shows in Colombia. Sure everybody uses chroma-keying in t.v. commercials and films, but we don’t know of anybody that has ever needed a complete 360deg floor and walls bluescreen of this size. Our plan at first was to build a wooden cylinder delimiting the shooting area, and to paint that blue or cover it with blue cloth. But the costs of building such a cylinder background were enormous and obviously outside our ten grand budget.  So we resolved to paint the entire soundstage with blue paint for $300 bucks. You have to dance with what you have, and take risks. Painting the whole studio with normal paint was going to bring problems. Normal paint is oil based, and that meant we were going to have nasty specular shines all over the place. But normal paint gave us somehow color consistency superior to water paint at lower costs. We had to tighten up some shots and deal with it.

Arriving for the first time at that empty blue sea, staring at it all and slowly acknowledging that the whole thing surprisingly resembled all those production photos of Star Wars we used to drool over, was the single, most satisfying moment of the entire production, and one of the proudest moments of my life. There are times when you feel that every sleepless night, every missed rock concert and every headache is well worth it. Standing in the middle of this blue lot was one of those moments.

You can check out all our production photos at our Flickr stream here.