Warning: "continue" targeting switch is equivalent to "break". Did you mean to use "continue 2"? in /homepages/3/d628491147/htdocs/clickandbuilds/ServiciosPblicosascifishortfilm/wp-content/plugins/revslider/includes/output.class.php on line 3468
 Creating a digital city – Servicios Públicos, a sci-fi short film
X

Expressionism is a modernist concept that saw its way into film making after Word War I, when  German cinema industry flourished vigorously with such hits as The Cabinet of Dr Caligari and Nosferatu. Hollywood invested huge amounts of cash to create exuberant settings and Deutsch studios knew they could not compete with that kind of spending. They decided to take a less realistic scope on their productions and use ingeniously whatever budget they had at hand.

That amongst many other reasons, was why German filmmakers adopted a more stylistic approach to film making, compensating their relatively small pockets with a highly creative use of scenery and lighting. It was common for them to paint a shadow on the wall instead of creating it with light, or to contrast the makeup on a face in an almost ghostly manner to make it stand out and symbolize angst or insanity. 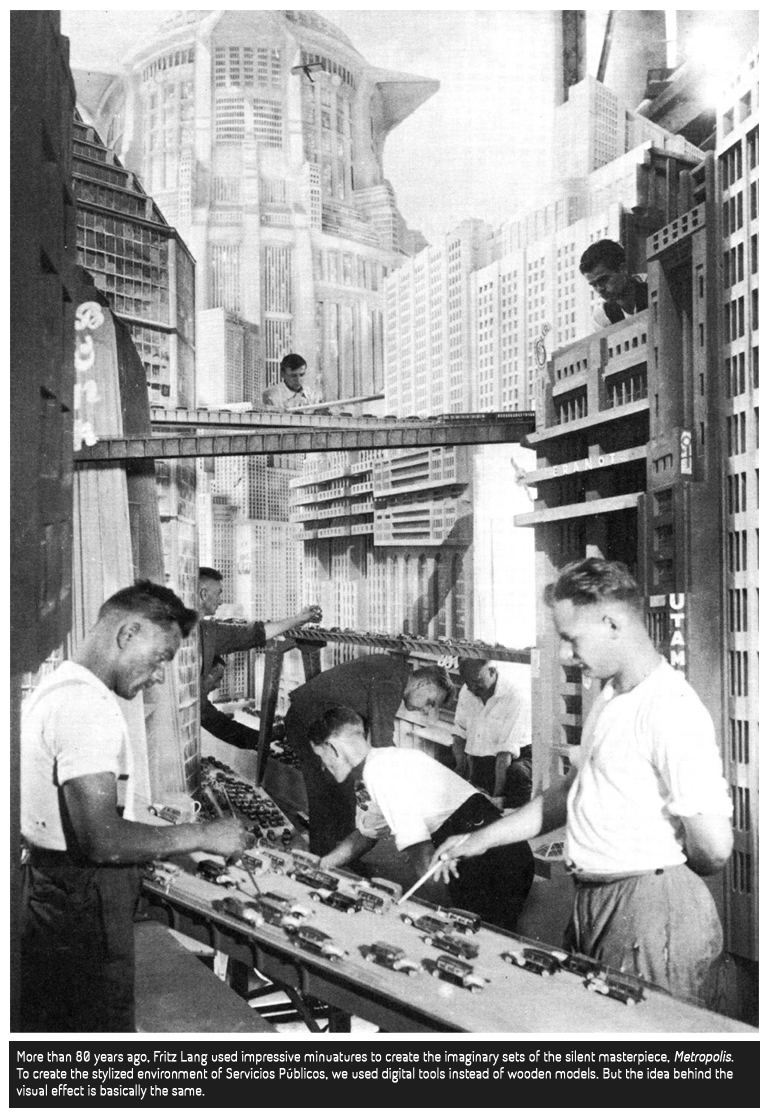 In order to pull off the ambitious sets of Servicios Públicos we have to do something very similar; compensate our shallow pockets with a creative use of the few resources we have at hand. Digital tools give us the possibility of building our sets inside a computer at a fraction of the cost it would take to construct them in traditional ways. Additionally, working digitally allows us the freedom of placing each lamp light, brick and window exactly where we want them to be, in a very similar way to how a writer plays with words.

Choosing Bogotá as the location of the film was a pretty obvious choice. Bogotá is the setting of the strongest memories of my life, good, bad and ugly. Although this story can resemble the harsh life in other Latin American cities, I wanted to write something that could only be possible in my city. I’ve always felt that throughout Colombia’s irregular film production history, there isn’t a single film that does for Bogotá what Manhattan does to New York or Blade Runner represents for Los Angeles. It’s natural for any casual moviegoer anywhere in the world to have watched tales unfold on the streets of San Francisco, Paris or Venice. But I doubt any of you readers remembers Bogotá beyond what the 6 o’clock news has shown. Even in our local filmography, Medellín and Cali have had a certain degree of exposure courtesy of our only internationally acclaimed directors, Victor Gaviria and Luis Ospina. But Bogotá still remains unexplored territory for film goers. 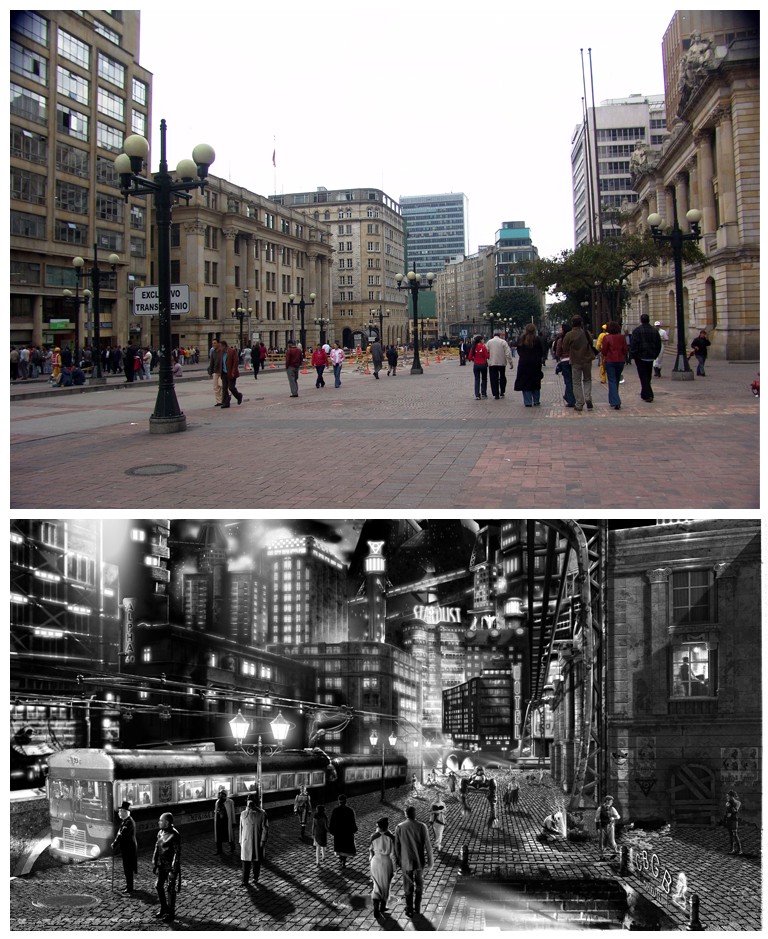 If I were to give my beloved city a digital homage, there is no street here that can better exemplify Bogota’s identity, with its unstoppable growth, chaos and eclecticism than the four century old Jimenez Avenue. This is a place where you can find neoclassical buildings and horrible present day McDonald’s restaurants beside a completely preserved 16th century church. It nicely represents the forced process of modernization the city had experienced in the early 19th century, going from a rural province to a massive modern vertical city in just a couple of decades. The passage of time is evident and we wanted to extrapolate it even further into an imaginary future.

We created the models from the official street plans. I drew splines over the blueprints delimiting each structure, extruded and began to add detail. The height of each building and the size of columns, doors and other elements was deduced by reference photographs and on location measurements. The textures were grabbed on site with an 8 Megapixel SONY DSC-F828. 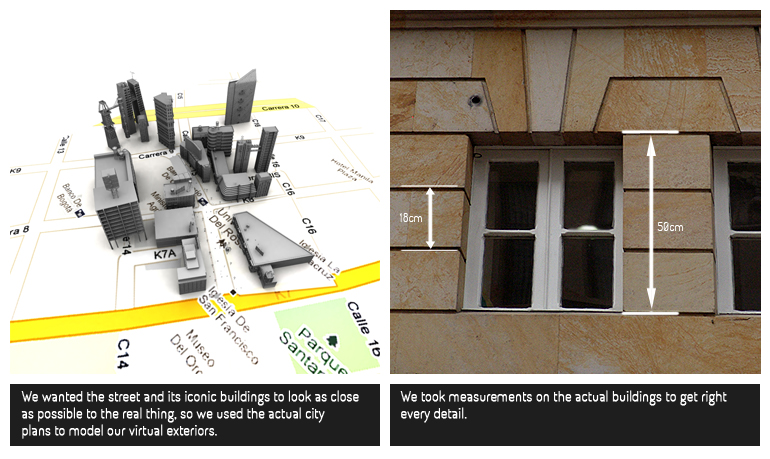 We recreated every iconic building on the block and around those we created new, imaginary structures to imply a different time period. We didn’t want to use slick and organic shapes like those of Rem Koolhaas and Frank Gehry that although very cool, could deviate us from our conceptual main frame. We looked instead at modernist architectural movements like Art Deco, Russian Constructivism, Functionalism and the Chicago school. We limited our materials to steel, brick and concrete, not going so far from the existent buildings and trying to create an almost seamless transition from the present structures and the imaginary ones.

I spent a couple of weeks researching into the history of architecture and checked out dozens of tutorials on line to get the hang of poly modeling in 3D Studio Max. Every building was made with a maximum of 5000 polygons to prevent my machine from dying at renders. I also decided to use bitmaps weathered by hand in Photoshop for each of the buildings that would appear in the foreground of a given shot, and procedural textures for models farther away from the camera in order to save up RAM at render times and previs stage. I used meters for consistency, as all our on set measurements were taken in meters.

Besides the always trusty 3D Studio Max manual, these are some of the sites I constantly checked for learning and reference. These artists are real,  generous geniuses that gave me invaluable knowledge and inspiration to make this movie happen.

13 COMMENTS ON THIS POST To “Creating a digital city”