Today I have incredible news... I want to share with the world the very first completed shot of Servicios Públicos. END_OF_DOCUMENT_TOKEN_TO_BE_REPLACED 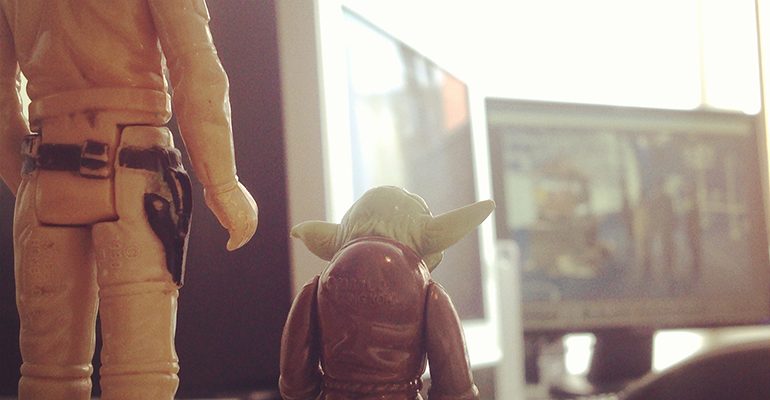 I turned 35 this week. Blame it on a rush of anniversary melancholy or on birthday cake intoxication, it's inevitable not to look back at all the time invested on this project and wonder if everything is worth it. END_OF_DOCUMENT_TOKEN_TO_BE_REPLACED

Costume design in Servicios Públicos was an enormous undertaking for such an inexperienced crew like ours. We had the huge challenge of designing and creating garments for 25 extras for under $800 dollars. Money was scarce, coffee was strong. How on Earth were we going to pull off a black & white Blade Runner with so little money? END_OF_DOCUMENT_TOKEN_TO_BE_REPLACED

Digital tools give us the possibility of building our sets inside a computer at a fraction of the cost it would take to construct them in traditional ways. Additionally, working digitally allows us the freedom of placing each lamp light, brick and window exactly where we want them to be, in a very similar way to how a writer plays with words. END_OF_DOCUMENT_TOKEN_TO_BE_REPLACED

We didn't know how the Sony Cinealta was going to handle the blue screen, and I was clueless about how to block the scenes in that huge blue sea with very little physical reference. So we made many cinematography tests before our definitive HD shoot in order to lock a lighting scheme and have every single shot nailed and rehearsed. END_OF_DOCUMENT_TOKEN_TO_BE_REPLACED

The main goal on this project was to make the most stunning film for as little money and small crew as possible. When we won the grant, all of the sudden, that possibility was real. The $10.000 that the Government gave us was not a whole lot of money, but was indeed much more than the initial $300 budget we used for our first tests. END_OF_DOCUMENT_TOKEN_TO_BE_REPLACED

Servicios Públicos is a science fiction short film along the lines of Orwell and Huxley, that depicts a day in the life of Angel Samsa, a petty thief that dares to defy the authoritarian government of a stylized and gritty version of Bogota, Colombia. END_OF_DOCUMENT_TOKEN_TO_BE_REPLACED